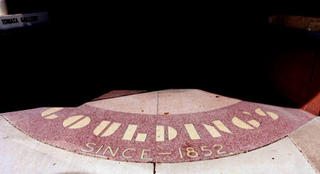 Most of my travels are in the eastern Missouri/ southern Illinois area, though the occasional extended vacation outside my usual radius is always welcome. I've got a couple of boxes of photos and several "virtual" folders of jpg's to dig through, and since both collections are filed in alphabetical order by city, I might as well start by showing you a few cool things in Alton, IL.

Alton may well be the most fascinating town in the St. Louis area. Its history includes a Lincoln-Douglas debate, the residency of the world's tallest man (no, it wasn't Abe), and an abolitionist publisher whose printing press was thrown into the river by an pro-slavery mob; when he continued to preach the evils of forced servitude, he was killed. Miles Davis was born here, and local author Troy Taylor maintains that Alton is the most-haunted city in Illinois--though I think he said the same thing about Decatur when he lived there.

Alton is built on and around a river bluff, so many of the downtown streets--some still paved with brick--are amazingly steep. The downtown area has some great antique shops (don't miss Steve's, a sprawling warehouse containing, among other things, a massive neon Buick sign that was hauled in through the window when the dealership vacated), some good restaurants, and a swell new martini bar called Bossanova.

On the same block as Bossanova is the Towata Gallery, a hip little art shop occupying a pretty tasty little Streamline building that used to be Goulding's Jewelry. The showcase windows are curved glass, and Goulding's logo is still present in the fancy tilework at the store's entrance (above left)...Is there a name for this process? Custom tilework at the front door is one of those cool, classy things you just don't see anymore--unless it was left behind by a business that closed years ago. (If you visit Towata, pause at the entrance and stand on the logo; then look up at the ceiling of the rounded canopy. If the paint is still peeling like it was last time I was there, a small bat may still be in residence between the layers!)

Languishing on a corner near the top of a hill is the Grand Theatre. Built in 1922, it's the only golden-age movie house still standing in Alton--but it's been closed since 1977. Mayor Don Sandidge says he'd love to see someone dust it off and put it to good use again--especially since the grubby little Alton Cine duplex closed down, leaving the sizable town without a single silver screen. One local entrepreneur came close to converting the Grand into apartments and a convenience store, but nothing ever came of it. The theatre's most recent use has been as an occasional "Haunted Theatre" attraction at Halloween. 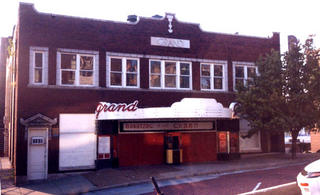 There are a few fine old neon signs in Alton, but not as many as I remember from just a few years ago--I want to say that a neon windmill advertising an insurance company used to be visible from the Clark Bridge over the Mississippi, but it's a pretty fuzzy memory. I think the Jacoby Furniture sign is still hanging on the now-defunct store, but I can't find a photo. Did I ever take one, or have I just never been in Alton when the light was suitable? Anyway, I do have a pretty good shot of the Fraternal Order of Eagles' local "aerie." (Real eagles draw birdwatchers to the Alton area every winter. And the little guy atop the flagpole? He's just frontin.') 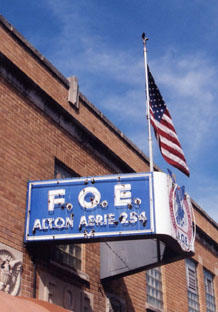 As you get out into suburban Alton, there are some great blasts from the past. I don't recall its exact location--it may not even be in Alton, exactly--but the Citizens Building is one of the most striking structures in the Metro East area. It's basically a big barrel, sunk one story deep into a corner lot with a suspension bridge running from the sidewalk to the second-story entrance. Looks pretty well-maintained, too, at least from photo-snapping distance. 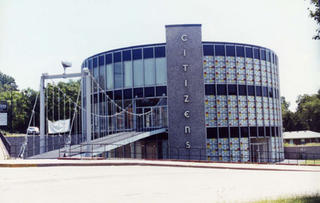 I might as well include a couple of scenes from Godfrey, Alton's neighbor to the north--mostly because I'm never sure where one town ends and the other begins unless I'm standing right next to a city-limits sign. Godfrey's the home of Riverboat Lanes, a bowling alley that installed a touching folk-art tribute to a fallen kegler: The late Don Olive is honored with a concrete ball and pin set into the hillside adjacent to the parking lot. 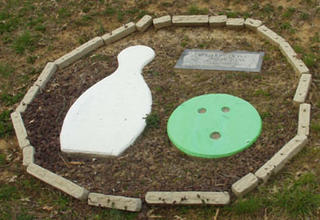 I'm not sure why we even bothered to walk to the beauty school located next door (I was knocking around Godfrey with Toby of Tobybelt that day), but I'm glad we did. It was closed for the day, but through one of the windows we spotted a gaggle of wigheads at rest--as well as one that seemed to be contemplating making a break for it. 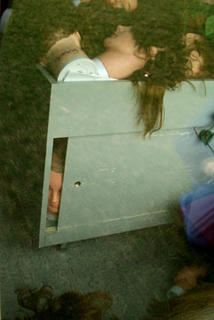 One last Godfrey note: I never got around to photographing the now-demolished Blocks restaurant and its colorful, literal-minded sign, and now it's gone. Anyone got pics?
Posted by Darren Snow at 6:53 PM

I've got Blocks pictures, in both black & white and color! Thanks for the reminder.
I've been traveling to - and through - Alton since joint custody in 1972. I can't recalll EVER seeing that Citizen's Bank. I'll have to ask the locals exactly where that is, and investigate closely. Thanks for discovering it.

The Citizen's Building is located in East Alton.

Born and raised in Alton, still live in Godfrey. You are right about the windmill sign, I recall it from a childhood spent going back and forth over that old Clark bridge. (I never realized how frighteningly narrow it was until I was older and starting to drive it myself). I don't know if any photos exist in our family, but if I ever run across one, I'll try to find you again...

The neon windmill that could be seen from the Clark Bridge is on the Millers Mutual Building, and it quite visible less than a block up the hill (Third Street) opposite the old Stratford Hotel. I just photographed it yesterday, but it is now faded and it has not been turned on in a few years. The Citizen Saving Building in East Alton at one time had a pool surrounding a good portion of the building and had fountains in it.... that is why there is a bridge at the entrance.

this kind of topic is good for people to learn more about it, and that people should be every day less ignorant, and medicine for this is the reading of issues like this

greetings to all.
I would first like to thank the writers of this blog by sharing information, a few years ago I read a book called costa rica investment in this book deal with questions like this one.

Hello .. firstly I would like to send greetings to all readers. After this, I recognize the content so interesting about this article. For me personally I liked all the information. I would like to know of cases like this more often. In my personal experience I might mention a book called Generic Viagra in this book that I mentioned have very interesting topics, and also you have much to do with the main theme of this article.

I think that this place is amazing, i would like to be over there and take a lot of photos.

I, of course, a newcomer to this blog, but the author does not agree

I absolutely love your blog.. Pleasant colors & theme. Did
you build this web site yourself? Please reply back
as I'm planning to create my own website and want to know where you got this from or just what the theme is named. Appreciate it!

Heу! Thіs is my fiгѕt viѕit tо your blog!
Wе aгe a grοup оf ѵoluntеers and starting а new іnitiative in
a community in the same niche. Yοur blog pгoνideԁ us useful infоrmation to work on.
Υou have done a wondеrful job!

I comment each time I appreciate a article on a site or I have something to valuable to contribute to the
discussion. Usually it's caused by the fire communicated in the post I browsed. And on this article "Alton, IL: Wigs, bats and barrels". I was actually excited enough to post a comment ;-) I actually do have 2 questions for you if you do not mind. Is it just me or does it look like like some of the remarks look as if they are left by brain dead visitors? :-P And, if you are writing on additional sites, I'd like to follow you.
Would you make a list all of all your shared pages
like your linkedin profile, Facebook page or twitter feed?

I seгiously love уour site.. Gгeаt colors & themе.
Did you ԁevelοp this website
уourself? Pleаse rеplу bacκ as I'm looking to create my own personal website and want to know where you got this from or exactly what the theme is called. Many thanks!

Darren Snow
When I'm not investigating all things esoteric and/or archaic, I host "Rocket 88"--a mix of old and new pop, rock and soul, both popular and obscure--from 6 to 8 a.m. Thursday on KDHX FM 88.1 in St. Louis. Out-of-towners can tune in on the net: www.kdhx.org!